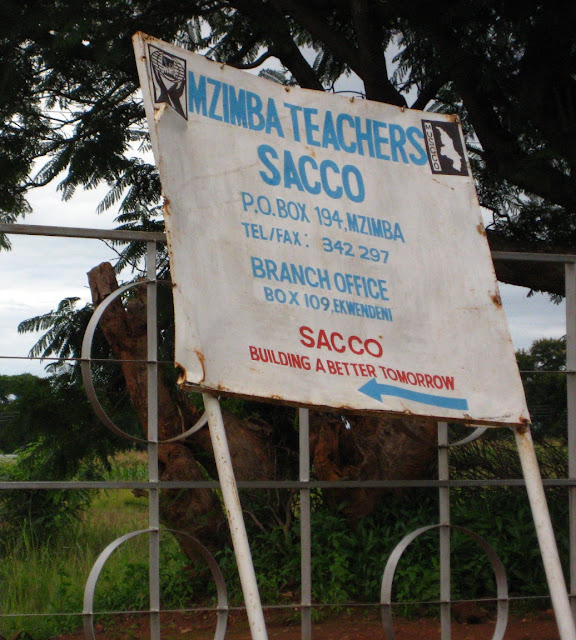 Savings and Credit Co-operatives, or SACCOs, are simply credit unions/caisses populaires by another name. In addition to all the other benefits of membership in a co-operative, SACCOs in developing countries are also helping to bring financial services to individuals and groups who aren't served by traditional banks (here's an example from India, and another from Malawi). You may have heard of microfinance, another means by which poorer segments of the population are able to access loans and other financial services. This short video from Kiva goes over the basics, most of which are also relevant to SACCOs:

In Malawi, there are 45 SACCOs affiliated with the Malawi Union of Savings and Credit Co-operatives (MUSCCO), for whom I work. Many of these SACCOs began life as study groups, savings clubs, or similar organizations whose members started saving money together and loaning each other funds. Many remain small to this day, serving a small or restricted clientele (like employees of one particular company), while the biggest, Fincoop, has six branches and membership in the tens of thousands.


Here is a whirlwind tour of some Malawian SACCOs I've had the chance to visit, and their diverse membership:

Early in February, we travelled to Bvumbe SACCO, near Blantyre, and met with women who had taken out a group loan to fund their various businesses and buy goods and supplies for home or farm. We visited the home of one woman, Dorothy Chapola, who (among a variety of other animals) showed off the pigs she was raising thanks in part to the loan. The women all spoke well of their experience with the SACCO, and hoped to take out a bigger loan once the first one was paid off. They may even eventually be able to qualify for individual loans (right now, the amounts they're borrowing individually are too small).


Back in Lilongwe, I had the opportunity to visit Mzinda SACCO, which serves employees of various companies in the city (including Sobo, the soft drink company I've mentioned before on this blog). Members of this SACCO usually contribute to their savings directly off their payroll, and one of the SACCO's present challenges is finding a way to safely expand their membership beyond payroll employees.

Their office is modest, tucked between a gospel music store and a hair salon on the second floor of a commercial building not far from the main city market. I was standing about a meter from the door when taking the above picture - there's not a lot of room behind the counter!

Mzinda SACCO is doing well, though, and just completed their computerization project this January. On my first day at work here, I got to travel out and visit them with Dan: it seems that they fired up Banker's Realm for the first time live and fried their network switch (or, more likely, the frequent power outages did the work). By the time we arrived, the tiny (3m x 4m?) banking hall was packed with waiting customers, the crowd even spilling out into the hallway. While we swapped out the switch, the cashiers began serving customers the old-fashioned way - with pen and paper (as most SACCOs in Malawi still do: only 11 of the 45 MUSCCO-affiliated SACCOs have been computerized to date). Stacks of ledger books can be seen everywhere around here!

The most recent stop on my SACCO tour of Malawi took me into the north, where, right on time for my birthday at the end of February, we visited Karonga Teachers SACCO, Rumphi Teachers SACCO, and Mzimba Teachers SACCO (guess who composes most of the membership of these SACCOs?...).

We were accompanying Owen Chona Phiri of Payment Solutions Malawi as he conducted training on their online payroll system, now used by the Malawian government to track payroll deductions for its employees (which includes the Ministry of Education, hence visiting all the teachers SACCOs). This new system was put in place because certain government employees were taking out loans from multiple sources (who, lacking a proper credit bureau, would not know about each other's loans) and ending up with too many loan repayment deductions from their pay, resulting in no (or negative!) take-home pay at the end of the month. This new system will hopefully ensure financial institutions are all on the same page about how many loans/SACCO share deductions an individual can afford.

The north of Malawi is a gorgeous place. Where the landscape around Lilongwe and Blantyre is mostly urban or agricultural, the north is lush and green and felt wilder. I was treated to a gorgeous drive down into Karonga, on a narrow and winding mountain road littered at one point with dozens of monkeys (chasing after the minibus in front of us, whose occupants had decided to throw food out the window). At various points, the trees cleared out to reveal beautiful views of Lake Malawi below.

We stayed at local guesthouses, which proved comfortable except for a scare the first night when the lightbulb in my room overheated (after being on for about an hour), melted the fixture, and exploded while I fearfully hid under the mosquito net to avoid the shrapnel. We ate [guest]home-cooked Malawian meals every breakfast and dinner, and the SACCOs we visited were very hospitable and kept us plied with cookies and soda. (Much better than coffee, the game industry's non-alcoholic social beverage of choice!) While Owen conducted training, I worked on our help desk application, and Dan assisted with various IT issues at the SACCOs, including changing the position of the internet satellite dish in Karonga - which is how I ended up in the picture below, and how I'll end this post! 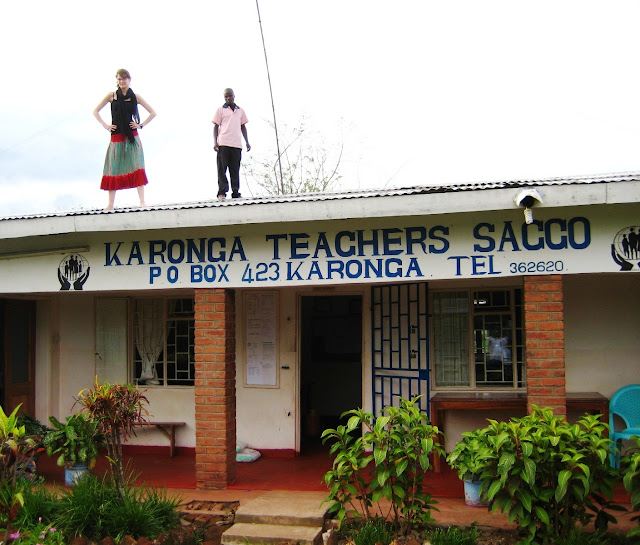