The great thing about culture shock is you know it's going to end. You can get used to anything. But it doesn't seem that way when you first get there.

I've been "in country" now for just five days, and already the experience is changing for me. This post is meant to be a snapshot of my mental state on arrival, and I'll revisit it in another post upon exfiltration (always wanted to use that word).

I'm fairly well-travelled, and I've been in poor countries before: Ukraine, Belize, Guatemala, Quebec -- but in those places I could, more or less, blend in. Crowds (becoming mobs) were my biggest fear coming here, and they've been a fairly irrational fear for most of my life. I don't like being an obvious target. I try not to attract attention to myself. I was worried that I wouldn't be able to do that here.

I was right. Not only can I not blend in, I am the center of attention wherever I go. People stare. People shout "mzungu" at me, as if it might have slipped my mind that I'm white (a problem I don't think I'll have). Neither of these things bother me too much. In fact, I find myself staring when I see another mzungu. I often think about going up and talking to them, but can't figure out what the conversation would be. "Hi! I see you're white. I am too!" Then what? Suggest a game of golf?

Here, however, white equals money. And folks don't have any. So I find myself swarmed. Swarmed by people just begging, often sporting a Chelsea jersey: "Hey boss, come on boss." Swarmed by people trying to sell me random stuff - guys seem to just have a handful of sunglasses or fruit or shoes: "Hey boss, good price, good price." Being called "boss" all the time takes some getting used to. Walking into a market, I get some sense of what life must be like for George Clooney all the time.

The swarming is extremely uncomfortable for me. People get right in your face, and often telling them "No" or "I don't want any" is taken as a sign they should try harder.

On one occasion two guys followed me home with what I judged to be the intent to just take what I had should the opportunity arise (which I'm happy to report it didn't). Of course on the flip side of this are hundreds of friendly, curious folks who just want to say hi. Sorting people into intention piles is practically impossible when you first get here.

Case in point: I was walking home from Vanessa's office the other day and a man comes up to me. His opening line: "Hey, nice tattoo." Tattoos are even rarer than mzungus around here. I try to be polite, but non-committal and thank him but keep walking. He keeps walking with me. His first question: "How long have you been in Malawi?" quickly followed by "Is this your first time in Malawi? In Africa?". Now, are these just innocent getting acquainted questions or is he sizing me up? Figuring that is must be obvious that I'm new here I tell him that I've only been here a few days, but lie and say I've been to Africa before. At this point he gestures to another man across the street, who upon seeing me grins widely and comes running up to us.

I've seen that look of recognition a lot now. People couldn't be happier to see me if I was a stack of pancakes and syrup. I feel like nothing so much as a giant walking pinata.

When he negotiates the traffic and makes it to us (crossing a street in Lilongwe is as dangerous as crossing rapids) my companion introduces his friend as Happy George, so-called because "He's always happy." And walking beside this great white whale, he certainly lives up to his name. As they start talking, their schtick becomes apparent: they've worked together before. Happy George asks me where I'm from, I reply "Canada" and they tell me they have many friends from Canada. Feeling clever, I ask them who these friends are. They are only able to come up with one: a woman with Engineers Without Borders, who apparently doesn't have a name. Happy George presses on, asking me where in Canada I'm from, and upon learning it's Montreal asks me if I speak French. I say yes, which may or may not be another lie depending on how francophone you are.

The preliminaries over, Happy George and Co. move into the pitch proper. They tell me they are students at the technical college, one in welding, the other in carpentry. They say they also make crafts with local materials. Having categorized me as "Ayn Randian" they tell me they would never ask for a handout and think that people should work to get ahead. Touching my arm, the first gentleman (whose name I never got) adds, "We don't think anyone is rich just because of the colour of their skin."

And that was the biggest lie of all. Everyone is Malawi thinks I'm rich because of the colour of my skin. And they're not wrong.

But it is difficult for me to deal with the expectation that I am going to "make it rain" (in the strip club sense) everywhere I go. In the midst of writing this, I was interrupted by Vanessa because she and another Canadian (Noella) were heading out to a tiny credit union and an orphanage in another part of town. Having never been to an orphanage before, I'm not sure what I expected, but it was probably something along the lines of Dickensian kids in petticoats and fingerless gloves, sewing wallets and eating gruel. 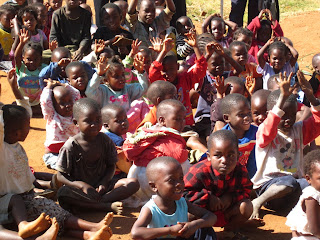 As soon as the kids saw the truckload of mzungus, they went berzerk - screaming and chanting in Chichewa which was translated to us as "They've arrived." This concerned me. How did they know we were coming? Why is this an event? Then an old man sporting a wool sweater vest and the single largest driving cap I've ever seen (he could have been heading out to the links himself) introduces himself as Alex the "Director of this operation." The kids are rounded up and made to sit quietly while he settles in to his pitch. He starts talking about financials, which organizations have supported them in the past, mission statements, and so on. He seemed particularly proud of a mountain bike one organization had bought him. But it was all at much too high a level for some out-of-work writer wannabe from Canada. He was speaking as if we were visiting foreign dignitaries.

Before I could say "There's been a mistake" we were ushered inside, and placed in three chairs at the head of the class and I realized there had been no mistake at all. The kids were made to put on a show for us. They recited the alphabet, the months of the year and other things, which they shouted at the top of their lungs. Truth be told they were quite charming. Then they were made to be quiet again while Alex, in true Glengarry Glen Ross fashion ("Always Be Closing") moved in to seal the deal. This time the pitch was aimed to appeal to our liberal guilt. "These kids' parents died of AIDS." "We feed them, they can't learn on an empty stomach." "They didn't eat today." And so on. Then he gave some helpful numbers, how much to support them for a year, how much for a month - to help us make a decision. I won't lie. I was pissed at being made to pay for a service I didn't want, and to be put through this guilt-based mzungu juicer. But I did feel guilty and I did want to do something. So, Vanessa and I gave $50 USD. Well, Vanessa did, but I'll pay her back. Leaving the orphanage, I couldn't help but wonder if the only thing the kids learned there was the song and dance routine for foreigners and if we had just bought Alex another mountain bike.

Thanks to Vanessa for letting me guest post on her blog.
Posted by Brook Bakay at 11:23 AM 3 comments

Of beers, beans, and bumper cars

It hasn't been all work, no play, these past few weeks... 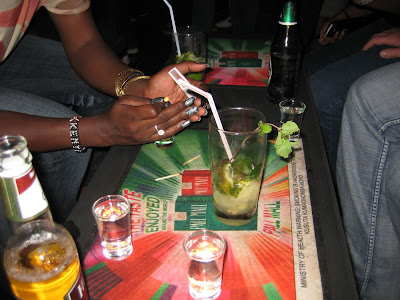 On Easter weekend, Katrina, Gavin, Mike, Patience, Maria, Alice and I ventured out to enjoy the local club scene. We started the night at Mo's Bar at the Portuguese Club. With autumn upon us, the night was too chilly for sitting around outside, so we didn't linger there long. It looked like the most amazing place for a pool party, though…

We then went over to Diplomats Bar, newly renovated and reopened in the centre of Old Town. When we arrived around 8-9pm it was relatively quiet, but by the time we left around midnight, it was packed with a crowd that looked evenly split between locals and expats.

Drinking and dancing ensued, and at some point, a group of Chinese men sat at the other end of our booth and began chatting with us. This progressed to one of them planting himself between us and buying drinks for the "beautiful girls". Unfortunately the drinks  brought to us were gin shots (ech..), and he also would not tell us where he worked or where he was from, so we didn't have much of a conversation. One of his younger companions showed off some pretty wicked robot moves on the dance floor, though.

Eventually we ventured over to "Zanzi's" for some late-night dancing, before calling it a night sometime around 1:30 or 2am. (Remember that here, "sleeping in on weekends" for me means getting up around 7 or 8am, so this is later than it sounds!)

Curious about the musical stylings of Malawian dance clubs? Well, here's one song (from Nigerian duo P-Square) that I hear constantly in bars, on the radio, and around town:


The other song I kept hearing on our night out? Party Rock.

Other recent amusements? Last weekend, we went out to the City Mall arcade with the kids (4 total between our house and the neighbours'). 300 kwacha buys you a minute and a half on the bumper cars!

I also have yet to mention the arrival of Paul and Noella Duncan, two CCA volunteers working with Fincoop. (Here's their blog.) They've been here since early April and will be around until early June. It's been nice to have other Canadians around, and I've been using the excuse to go out to Bombay Palace more often!

I've also been learning to cook some new recipes, and yesterday, with Cinco de Mayo as a weak excuse, I cooked up some fried avocado with red beans and lime rice. (Meant to be lime-cilantro rice, but my leftover cilantro didn't look so hot.) Katrina graciously showed me how to prepare the red beans.

Even breaded and fried, I'm not a huge fan of avocado. I've been trying - they are cheap and plentiful here. I do like me some guac, but unfortunately there are no tortilla chips in Malawi.

Now what? Brook shows up this morning (fingers crossed that his flight isn't cancelled - airline schedules have been flaky the past few months, as foreign airlines struggle with the forex shortage). Once he arrives, the adventures should begin again. Another pub crawl is planned, as well as a picnic, a tour of southern Malawi, and a safari in Zambia.

Till then... wish me luck in not getting lost on the drive out to the airport!
Posted by Vanessa at 6:33 AM 6 comments